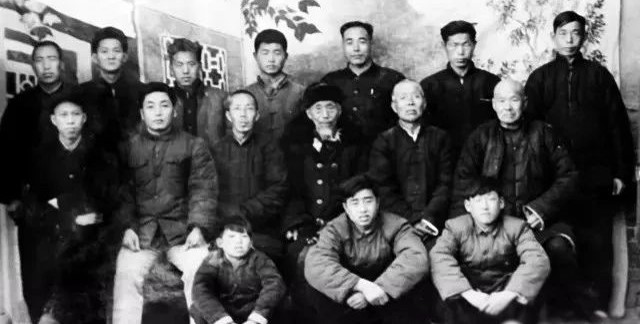 The sixth entry in the coverage of Taijiquan styles development. As our Taijiquan history section denotes, Xi’an is the home of our Taijiquan (inclusive of Zhaobao and Chen Style) , in addition to the Beijing (Chen Style). The reasons for this are understood in the context of history and how Taijiquan became almost extinct in its homes of origin. We therefore outline the important return of Taijiquan to Chenjiagou (Chen Family Village).

In 1932, Tang Hao together with Chen Ziming journeyed to Chenjiagou. Chen Ziming was Chen Xin’s nephew and used to teach in Shanghai at the time. Tang Hao (1887-1959) was from humble beginnings but worked hard in practising Six Harmonies Boxing (Liuhe Men) and becoming a Lawyer. Tang Hao also studied many other martial arts including Chen Taijiquan, and Japanese styles during his time there. He was one of the editors of the publication department of the Nanjing Guoshu Academy.

When they arrived to the Chenjiagou, Chen Chunyuan (the nephew of Chen Xin) had a copy of a set of manuscripts that were written by his uncle over the course of 12 years. This text [Taijiquan Illustrated, 陈鑫陈氏太极拳图说] was published in 1933 and whilst it outlined the practice of Chen Style Taijiquan in the past (today it is known as Small Frame Taijiquan), it became a classic for all Chen Style Practitioners. At the time the practice of Taijiquan in Chenjiagou was still flourishing and the expression that almost everyone in Chenjiagou could practice some martial arts was evident. After just a few years little did people expect chaos an catastrophe to hit Chenjiagou.

In 1938, Henan province was the centre of an ongoing effort by the Nationalist Government (Guomingdang, KMT) to stop the advance of the Japanese troops. Many local young men were conscripted into the army. The combination of natural and human factors ravaged Henan proivince.  In 1941, locusts plagued Wen county and the Guomingdang (KMT) had taken controls over the area. Henan province was divided into the eastern half (under Japanese occupation) and the western half which was supposed to be under the Nationalist Government (based in Chongqing after fleeing Nanjing).

In 1942, the seasonal rains failed, causing severe drought. Combined with the ongoing locust plagues the harvests were destroyed and there was little food supply. The culmination of no local produce and the inability to obtain supplies from elsewhere during the conflict led an unfathomable situation of famine that started to cause great grief to the people during the winter of 1942. The famine caused significant tragedies with rising starvation and ongoing rise in diseases. In such dire situations families would sell their children in the hopes that would have a better chance elsewhere and some starving people had to resort to cannibalism or eating bark of the trees to try to survive. During the time an estimated 2 to 3 million people died from starvation or disease, and over 4 million people fled Henan province. Chenjiagou was in the centre of this drastic situation and of the 4,000 or so residents many suffered and over 800 fled (typically to Xi’an). During those years, many people left Chenjiagou (e.g. to Xi’an), many passed away in the wars, disease and famine.  Taiji had become extinct in its home of Chen Family Village.

Chen Family members and their demise through affiliation with KMT

After those years the situation improved ever so slowly in terms of famine and sino-japanese war, but the civil war between the CCP and the KMT continued. Since Chenjiagou was a part of the early movement into the area by the KMT, many of the villagers were associated with the KMT and reprimanded by the CCP. Some examples include Chen Zhaoxu (1912-1959) was the second son of Chen Fa’ke. Since Chen Zhaoxu was connected to the local militia affiliated with the KMT, he was jailed in 1955 and eventually passed away.  Chen Zhaohai (1899-1950) was Chen Zhaopei’s brother. Chen Zhaohai fought in the nationalist army under Fan Tinglan. Later he relocated to Zhengzhou. In 1949, he was imprisoned and then under the Repression of Anti Revolutionists movement in 1950 was executed.

The New Large Frame of Taijiquan returns to Chenjiagou Today’s what he could call mainstream Chen Style Tajiquan is derived mostly from the teachings of two key teachers that originated at Chenjiagou but resided elsewhere. These were Chen Fa’ke (1887-1957) who brought Chen Style Taijiquan to Beijing in 1928 and Chen Zhaopei (1893-1972) brought Chen Style Taijiquan to Nanjing in 1930 (originally was in Beijing then invited Chen Fa’ke to take over) and taught for over eight years.

In 1953 the Chen Village invited an old Master Wang Yan (a disciple of Chen Yanxi) to teach he taught rudimentary methods to a few villagers for a short while before returning home to Zhengzhou, most of his students were handed over to Chen Zhaopei. In 1958, Chen Zhaopei whom resided in Zhengzhou at the time visited Chenjiagou for Chinese New Year. It was his first time back in decades. Chen Zhaopei whilst advanced in years (65) felt that it was a shame that there were no longer any practitioners in Chenjiagou. He was saddened that there were no successors in the birthplace of Taijiquan and no serious practitioners left in Chenjiagou. It was a difficult decision because at the time both his wife (second wife) and son (whom had a good job and family in Zhengzhou) were against him returning to Chenjiagou. He also had to retire from his work (Flood Control Committee) earlier foresaking an increase in his pension. Chen Zhaopei however against all odds felt a sense of responsibility and returned to the Chenjiagou during his retirement years. He taught around 30 villagers including many who were to become well known in the future.

Unfortunately this was not going to be an easy quest for there were still a number of CCP initatives that impacted the ability to propagate and teach Taijiquan during those years. The Great Leap forward was distracting and in 1966-1976, The Cultural revolution saw the repression of traditional teachings including martial arts. Facilities were closed down and practitioners were prosecuted. Chen Zhaopei was said to have been persecuted by the red guards and even attempted suicide during those years. His legs were injured for almost two years and had to use a stool/walking assistance during the time. Much of the training had to be conducted in secret and many elements (eg weapons) a challenge to practice in confined space so mostly only the laojia yi lu was taught.  After Chen Zhaopei’s death, Chen Zhaokui (Chen Fa’ke’s youngest son) continued teaching at Chenjiagou. The local secretary of the CCP for Wen County, Zhang Weizhen also invited Feng Zhiqiang to teach. Feng Zhiqiang visited three times for short intensive teaching sessions. In fact, during the time between those short teaching periods, the students had to practice much on their own and through their efforts would develop a unique approach to taijiquan, recognized most widely today as Chen Style Taijiquan.

It is ironic or maybe Karma that the Japanese were responsible for Chen Village’s new rise. Although the Japanese army were bombing Henan province in the 1940’s, fighting the the KMT whilst the locals were trying to survive with the natural disasters that brought the area to starvation and death. It was a Japanese film crew that came to film the origins of Taijiquan, during those days there were strict controls so their team stayed in Zhengzhou and travelled every day to Chen village. Those days become the beginning of recognizing Chen Village and its new representatives.

As a result the teachings at Chenjiagou were distinguished into the old (Chen Zhaopei’s) and the new (Chen Zhaokui’s) frame of practice. The Taijiquan practiced by the older generations would find a new home in Xi’an and become known as Chen Small Frame Taijiquan. Whilst the descendants of Chen Fa’ke would derive a number of different versions of Taijiquan practice (sometimes called Beijing Chen Style Taijiquan) including Li Jingwu, Lei Muni, Tian Xiuchen and Feng Zhiqiang amongst others.  It is interesting that both Chen Fa’ke’s and Chen Zhaopei’s longer term disciples in Beijing and Zhengzhou respectively had attained different flavors to their Taijiquan whilst Chen village became very standardized.