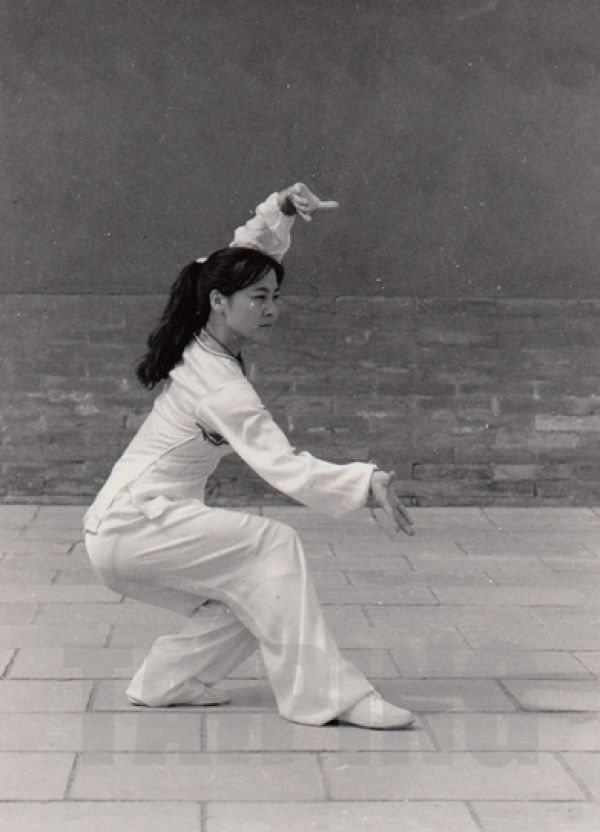 Given natural circumstances in martial arts men dominate but there are exceptions especially in the internal arts which rely on skill/technique/strategy over external force. One of the most renowned female masters of our generation is M. Ge Chunyan (戈春艷, 1959- ) who was born in Beijing. She started learning martial arts in 1972 and was among the first batch of athletes that formed the renowned Beijing Wushu Team in 1978.

As a young girl she originally joined a different sports team but when the Wushu scouts (Wu Bin and Li Junfeng) were seeking new recruits of talented young athletes, she stood out. At the young age of 13, M. Ge Chunyan was considered ‘old’ for the talent program (most were young like Jet Li, who was only 7 at the time) but as M. Li Junfeng explained it was her determination and hard work ethic that allowed young Chunyan to be selected (as the oldest recruit). She had the never give up attitude to training so that if she could complete a technique she would practice it more in her own time, arduously until perfection.

The initial phases of the Beijing Wushu team was a grueling experience, it was the launch of an entire new athletic paradigm within China and the Beijing Wushu team had to become the best. During those early days much of the ‘standardization’ was still in development and the skills of the young athletes were imparted by experienced old Master hands.

M. Ge would often tell stories of the different Masters they encountered. The students would be introduced to a style/system and trained daily for up to a month. Then they would then be asked their major of study for the traditional segment. M. Ge Chunyan opted for Baguazhang and her tale of mastery began.

M. Li Junfeng, her coach was also a master hand of Baguazhang and had a vivid interest in the style, as many different experts were called upon to teach M. Ge Chunyan different families of Baguazhang such as Li Ziming, Liu Jingrui, Sha Guozheng, Sun Jianyun, Sun Zhijun and so on.  Together Li Junfeng and Ge Chunyan formulated a set of skills (routine) that would absorb the essence of the various teachers’ styles. The influence of Tongbeiquan in Sha Style Baguazhang, the wrapping and spiralling of Liu Jingrui, the swimming dragon body and coiling of  Sun Zhijun and so forth. Ge Chunyan was also well skilled in Chen Style Taijiquan, where she was a disciple of Lei Muni and later Feng Zhiqiang whilst also obtaining insights from many masters of that generation.

During that time she was to become the National Champion of Baguazhang for an amazing five years in a row. In 1984, M.Ge shocked the entire Wushu community by winning five gold medals in the 1984 national championships in Chen Style Taijiquan, Long Tassel Sword, Baguazhang, Three man weapon sparring and the individual all round championship. It was a rare feat and even more astounding that during the year of the compeition she was also involved in the filming of Wulin Zhi (武林志, Pride's deadly fury) as the leading actress potraying a Baguazhang exponent.

After her competitive years in performance wushu like most athletes that push the boundaries, she obtained some injuries and became a Wushu coach herself. Her studies of martial arts later continued but more on the traditional route. M. Ge became a closed disciple of GM. Sun Zhijun and of GM. Feng Zhiqiang focusing on the complete study of the big three internal arts – Taijiquan, Baguazhang and Xingyiquan.

With GM. Feng Zhiqiang she often spoken of waking early in the morning as training started deep inside the Heavenly Temple Park (Tian Tan) at 4am, where they would practice Zhan Zhuang (Standing like a post - Qigong/Meditation) for an hour before proceeding to train Taijiquan. Even in the middle of the cold harsh Beijing winters they would start with many layers of clothes and later the heat and steam from the training would see them left with only a layer or two. With GM Sun Zhijun she recalls the amount of circle walking practice especially the Xia Pan (Lower plane) where for hours of training the legs would become exhausted and strengthened tremendously. Both GM Feng and GM Sun were renowned for the fighting/combat proficiency, GM Feng was often the one chosen by Chen Fa'ke to take on all challengers with his powerful Tuishou skills, whilst GM Sun was often heralded as one of the best Baguazhang fighters with his amazing integrated throwing skills.

M. Ge Chunyan has also appeared in many films such as Wulin Zhi (武林志 Pride's deadly fury 1983), Dadao Wangwu (大刀王五，Hero Wang Wu 1985), (Deadend of the Besiegers 1992) and (The Legendary Amazons 2011). Even today, M. Ge Chunyan is called upon as an advisor to films like 2013 film The Grandmaster (一代宗师) by Wong Kar-wai where she was the chief advisor of Baguazhang and trainer for Zhang Zhiyi (who won best actress for the film). As expressed by Wong Kar-wai, he sought out the most traditional and recognized experts of the respective styles which included Duncan Leung (Wing Chun), Wang Shiquan (Bajiquan), Fu Yangquan (Xingyiquan) and Ge Chunyan (Baguazhang).

M. Ge Chunyan is an 8th duan Wushu expert and a recognized Wuying (武英, Martial Hero) category athlete (the most prestigious recognition awarded for a Wushu exponent in China). Although once a Wushu athlete, today she dedicated to the internal arts and their importance towards health preservation.

The importance of San Ti Shi in Xingyi Quan | 万法源于三体式